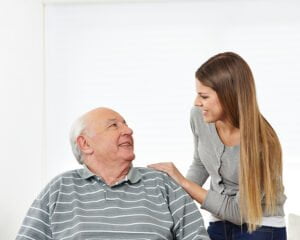 This wasn’t a conversation Mary ever thought she would have to have. Her father, 82 and widowed, was beginning to struggle with his health and strength. She noticed the changes the last time she visited him. She knew he would be better off somewhere else, like at an assisted living community where some of his friends were, but she stressed about this conversation.

She didn’t know how he would react.

Her father had long been a fiercely independent man. He had a difficult time asking for help. Even when assistance was offered, he rarely ever accepted. She didn’t fully understand why, but she respected it. It was just part of his personality.

By approaching this subject, she would be tapping into numerous concerns, fears, or underlying issues she knew little about. She just remembered that when her mother was sick, despite his best efforts, things were difficult and she had to step up and help. She also remembered that talking about other living situations or options was met with defiance and even belligerence.

So, she avoided the conversation. For a while.

She did what she could to help. She checked in on him, did some shopping for him, and even helped him prepare some meals. Things were okay, but she noticed how fast his physical condition was declining. He was aging right before her eyes and she wanted him to be comfortable during these final months or years. She had no clue how much longer he would be around, but she imagined the loneliness was starting to get to him.

Finally, one afternoon she had the idea to make a good meal and eat with him.

Most of the time, because she had so many other things to do, she would help him get something to eat and then rush out the door. This time, though, she planned to sit down and have a good, healthy meal with him.

They talked about the weather, her job, his grandchildren, other family and friends, and then she began to transition the conversation to activities. What was he doing? What would he like to do? What were his friends doing?

The more engaged he became with some of these topics, the easier it was for Mary to begin talking about assisted living. To her surprise he didn’t dismiss the notion outright. He actually started asking questions and within a few weeks they were touring a couple facilities. Mary was relieved to know that all she really had to do was start the conversation in a loving and supportive way.