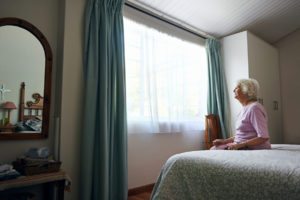 Occasionally, from time to time, people have to deal with certain peer related circumstances when calling assisted living home. It’s not that different than an apartment style living environment. One of the major differences, though, is several of the residents may have a tendency or habit to keep their doors open.

Why seniors may keep their doors open.

It probably has more to do with a welcome to other residents. When seniors move into assisted living for the first time, they are often surprised at how many new friends they can make quickly. They may have visitors stopping by, knocking on their door, checking in on them, and seeing if they want to go and take part in a certain activity, watch a movie, or do something else.

By keeping the door open, it is an invitation for people to say hello as they walk by, and that can certainly be a positive influence in their life.

At the moment, though, your mother is dealing with an uncomfortable situation for her. Maybe she kept her door open for the first couple of weeks, but one particular resident is causing her trouble. This individual had a habit of walking in rather than knocking. Even though the door was open, there is still protocol in which a person should stand in the doorway, knock on the door, and be invited in.

Your mother decided to keep the door closed rather than confront this other woman directly. Still, this woman is simply walking in without knocking, startling your mother, and creating an uncomfortable situation.

How can she deal with the situation in a positive manner?

If she has not confronted or talked to the other person directly, it’s time that she did. Your mother may be the type of person who avoids confrontation. That’s okay. She may feel that saying anything could lead to a confrontation. It might, but then again it might not.

That staff member can have a conversation, keep an eye on your mother’s door for a while, and the situation should resolve itself.

What if the other person becomes agitated and takes it out on your mother?

Most of us have dealt with disrespectful, obstinate, and obtuse neighbors through our lives. It will happen, even at assisted living. The staff are there to help keep everyone as comfortable as possible. In this situation, it’s not your mother’s responsibility to willingly or unwillingly deal with simply because another person doesn’t understand boundaries.

For more information about Pipestone Place Assisted Living in San Antonio, TX or to take a tour, call today (210) 718-0211.