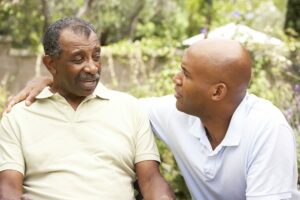 Jacob wasn’t quite sure he wanted to even think about assisted living. After his wife passed away, it took a while for him to adjust to living alone. As his eyesight began failing due to glaucoma, he lost his license to drive. That limited his ability to get out, spend time with friends, and do things that used to be easy.

His family started talking about assisted living a few months ago.

They weren’t pressuring him, but there were times at night when he would think about conversations and believe they really wanted him to move. He just wasn’t sure about it. What he was most afraid of was giving up independence. He didn’t want somebody else telling him where he had to go, what he had to do, or who had to sit with at dinner.

There were days where Jacob would rather just sit around doing nothing.

He actually enjoyed those days sometimes. Lately, of course, there were far too many of them and he was feeling lonely and frustrated. Yet, he thought that an assisted living community would basically take over his life, dictating to him where he had to go, that he could spend quiet time in his room alone, or that he would need to keep the door open.

He eventually expressed these concerns with his family.

He told them he would be interested in considering assisted living, but he had some fears. They understood and nobody pressured him. They helped him take those first, perhaps tepid, steps in exploring the world of assisted living.

They brought over a few brochures for him to look at.

There were several assisted living facilities in the area and his family stopped by one afternoon, as a collective group to have dinner, and they showed him some of those brochures. It did little to bring him assurance because he knew what marketing materials were all about. They were about selling an idea, product, or service. He wanted to know just how autonomous he could be in this new type of situation.

He became interested in some of the activities listed there and, with the help of his family, they made appointments for a few tours.

Sometimes, those first steps are going to be timid, tepid, or even nervous. By not pressuring him, Jacob’s family allowed him to take the lead and that kept him feeling in control, which can be an all important aspect some seniors worry about losing by even looking into assisted living as an option.