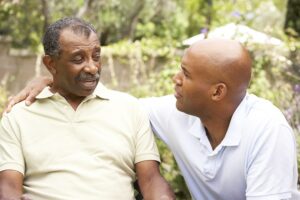 Melissa was getting frustrated. She had been looking after her father for a while. When he was first diagnosed with dementia, neither Melissa nor her mother really knew much about it, what to expect, or what to do. He seemed, for the most part, ‘normal’ most days; he did need a lot of help. Yet, as time marched on, things became much more challenging and it was not just frustrating for Melissa and her mother, it also seemed to be an uncomfortable situation for him. That’s when they started looking at memory care assisted living.

It wasn’t that Melissa couldn’t handle the situation.

When they sat down with administrators at various facilities, Melissa made a point that they understood she could handle the situation, if need be. She took a great deal of pride in her ability to offer comfort and be there for her mother and father, especially after everything they had done for her. It might have been a bit of insecurity on her part, but she wanted to emphasize this was more about comfort and quality of life for her father than for her.

The administrators basically had the same response. They all told her the main priority for their staff is to offer safety and comfort for those who are dealing with a variety of challenges in their later years of life. For those who have been diagnosed with dementia, which can include Alzheimer’s, the more experience people have working with these elderly men and women, the easier it is for them to provide comfort.

They chose an assisted living facility that her father liked.

At first, he wasn’t too keen on the idea of moving, but he understood the reality. They chose a facility that was only a few minutes away from his house so his wife and Melissa could both visit on a regular basis. At first, things seem to be overwhelming. He was anxious and nervous far more often during those first couple of weeks to the point where Melissa was ready to take him home.

However, it was only a matter of getting used to this new living environment. When a person is dealing with dementia, their memory is faltered, they can become confused and anxious more frequently, and that can create stress and anxiety. The earlier a person makes a change in their living environment after they’ve been diagnosed, the easier it is for them to be comfortable with this new change.

Within a few weeks, though, both Melissa and her mother noticed her father getting comfortable with this new situation, was meeting people, and stayed active and mentally engaged in a variety of activities, which would turn out to be extremely beneficial for him down the road.